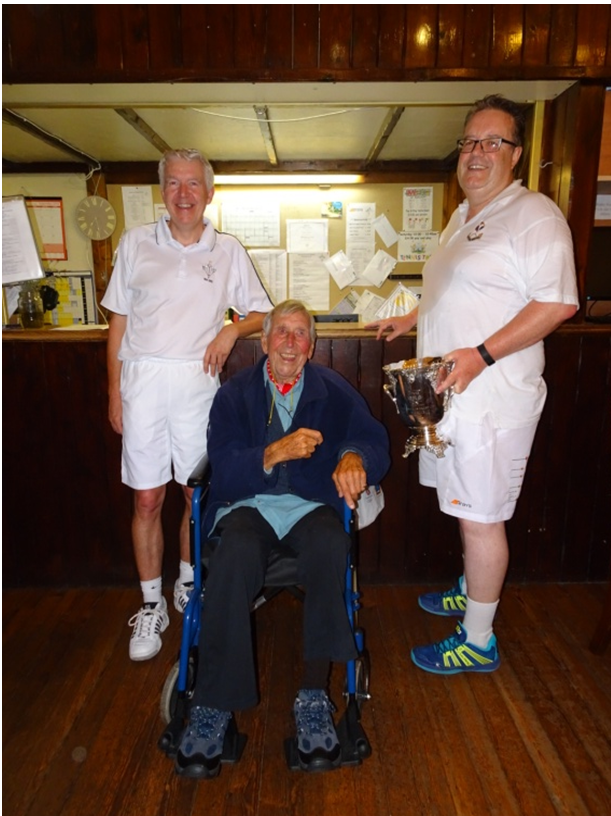 Sixteen players lined up for the 2016 Dougie Sharp Cup, with handicaps ranging from 70 to 31 and competed in groups of 4 with both winners and runner ups going through to the knock out stages.

Roger Thompson, the most senior player in the tournament, did well to recover from his first match loss to Ken Osborne to emerge as runner-up from that group while titleholder Graham Law took a surprising early exit having drawn a strong group that included Pete Tambling and Adrian Warden. The Flynn/Way/Turner/Armstrong group saw mostly very competitive matches with the latter two progressing, and a couple of points each way separated finalists Player and Halliwell from the aspirations and play of Dobbs & Wilson in their group.

Quarter finals started on Sunday afternoon and Ken Osborne beat Jim Player in a close contest (6-5) before being beaten by an in-form Neale Turner in their semi final 6-0. This despite a 36-point handicap (one serve, ban the tambour, home before tea time etc. etc.)! In the bottom half of the draw Adrian beat Roger Thompson before losing narrowly to Simon Armstrong 6-5 in the semi final. Adrian might rue his 5-3, 40-0 lead he let slip for some time. Adrian was later heard (in the bar) to prefer a re-match than a consolation drink!

In the final Neale had to give Simon a ten point handicap advantage but took a 4-2 lead in any case with Simon trying to “play tennis”. This considered approach changed as Simon resorted to “ugly tennis” and though seen to run for the ball on occasion hit mostly forcing shots. Perhaps Neale’s mammoth effort in the semis was his high point as surprisingly he hit the ball in the net a few times and Simon gained strength to run out an 8-6 winner.

Dougie and Amanda were in attendance on Saturday and for the final stages of the competition on Sunday afternoon and Dougie complemented all entrants on the good standard of tennis played. Also thanks go to Ged and Aaron for the organisation and marking. This is a great competition which is fun for players of all standards and participation in next years’ event is recommended.