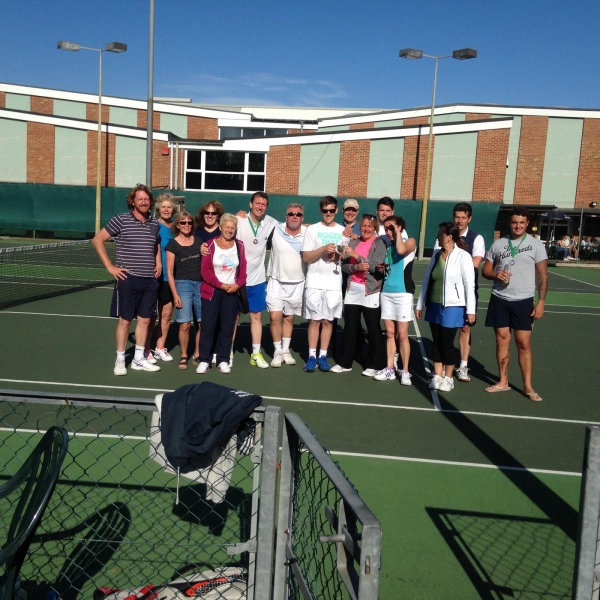 The Bedford Fun Doubles was held a couple of weeks ago which was the first tournament of the year.

The Gods were very kind to us as we had the most beautiful day which made the event evenbetter. Although there wasn’t a huge entry we altered the format so everyone changed partnerswhich worked well. There were some really good games and we ended with one semi final being really close with Sharon & Dec winning a one point shoot out against Pam & Hugh. The other semifinal saw Spen & Linda beating Sue & Simon. The final was very competitive with all four players upping their game. This meant Dec charging all over the place and landing some brilliant shots giving Spen the giggles which somewhat hampered him. After that the only outcome was a well deserved win for Sharon & Dec.

We would like to give a Great Big thank you to Pete Wilson who very kindly bought and prepared a fantastic BBQ which was enjoyed by the players and spectators. We collected £70 to repay Pete but he very generously gave it to Ginny Flynn who did a sponsored swim the equivalent of the English Channel for Diabetes UK, as William, Ginny and Simon’s son has recently been diagnosed with the condition. Thanks again Pete and well done Ginny!

It was a really great event with the top 4 couples going into the main draw and 6 couples into the plate. Again we were very fortunate that the weather was kind to us and there were some very close matches. In the main draw semi finals, Sue & Vinny, and Jane & Hugh went on court while the plate semi was in play. After that finished the other main draw semi saw Bev & Joe and Sharon & Spen have a well fought match with Bev & Joe winning. The other match continued……… The plate final then went on with Jack & Caroline beating Linda & Aaron in a really good match. STILL the other main semi continued!! Hugh & Jane had a big lead in the first set when Sue & Vinny clawed their way back and won it in a tie break. Jane & Hugh then took the second set and it was a real tussle for the third which Sue & Vinny eventually won. Phew!!

Even though they had just played in the longest match ever in the history of the mixed doubles Sue & Vinny fought hard and gave Bev & Joe a good match in the final. Bev & Joe narrowly took the first set then Sue & Vinny went ahead in the second. But Bev & Joe showed their mettle and came back to win the second set and the match for the second year running.
Well done everyone, what a fabulous day of Tennis.

Thank you to all who took part and Mark the chef for providing a wonderful feast of a BBQ and salads.

As many of you will have joined the British Tennis Membership online, Seacourt was allocated Wimbledon tickets. Unfortunately, Marie our previous coach didn’t tell anyone at Seacourt what we had to do to get the tickets to the club, and as we were running out of time to claim them, they were allocated to individual members and the list of the lucky winners is below.
Hopefully, many more Seacourt members will join the British Tennis Membership so we can get even more tickets next year and make a special event of it.